Hello. This so far is a brief presentation on Ni(I will post smth more detailed somewhere in the future).

1)recursivity: It's used in programming in C++ alghoritms (or any language, for example C+, Pascal...) in highschool. Its eassier to understand by showing alghoritms as examples and there are many on the internet, for example: the one which is about Fibbonaci numbers. 2)simbolism: It's used in Paulo Coelho writing, for example, "The alchemist", in the paragraph: "...So it all units into one" Its a long one, its mystical, (its about the beauty of Ni of condensing every concept into one ) ***check out the part when Santiago talks to the voice from the sky, its right before the last chapter. 3)Conspiracy theories, also known in hard times as apocaliptic vissions: Its used in the book ,,American Psycho" by Bret Easton Ellis when the unseelie, ENTJ protagonist imagines an apocaliptic view on the city, due to his disorders 4)As a Pi function(perception as Si) its concerned with having a panoramic view on things.(I dont really know how to articulate it, but since its an introverted perception function, people who have it strong, have an air of an old, wise man/woman.Even Pe doms can have strong tho thats very rare)Despite Si, Ni find meaning in different aspects.You can call it abstract, I guess, but a good observation on it, its that they may "just know" the cause of an event without being fully aware how off all steps that were done in kind of a subconcious process.Imagine an alghoritm which calculates the sum of all digits of an number, and, with a single blink on the instruction, you have already found the effect of it.(no need to give examples, like random numbers in order to be all sure) **Te users are better at offering definitions, because they're way of being precise is more accsible on a large scale, so...I would love to hear their thoughts on this topic 👍🌟** As a Ti user I need more time to reflect on things, to internalize them in order to master them.Te users, on the other hand, are better at mastering different proffesions which are not related to eachother, they are like: "I can do this, then that and that in the same day and feel no need to reflect on my capacities before taking initiative, since, yes, Im good at taking decisions"

I found it interesting that you used recursion to describe Ni, I see it as more of a convoluted neural network because it takes information from a variety of nodes and gives out one output. Which is how I’d describe Ni - it uses a graph-like connection between various seemingly unrelated nodes (pieces of information), seeing patterns between them and using them to identify a trend and come up with ideas for the future.

Recursion is like going back and forth and so on. Thats why I associate it with that part from "the alchemist" book. A mystical definition of it its an entity who has a wide, panoramic view on the world, who oscilates constantly from the past, present and the future in order to combine the patterns from those times, and so to feel a sense of unity.

OH I see. I was going with recursion in the computer science context, and since you mentioned C++ I was going with that. I agree with the definition you shared, thought I might not have thought of it myself.

And I thought I was crazy

I actually wonder how many people typed themselves right on this app, you know.

people in the personality universe

It has been a DAY ... definitely the kind of night for curling up with a good stuffed animal and a familiar movie.

I woke up happy to be in my own skin this morning. A personal Victory.

What do you do

What do you do when you want something to happen but there's nothing you can do about it?

Lol is it just me or is physical therapy staying to rely more on technology then actually dealing with another person? My physical therapist and I are scheduled to work together 3x a week and when I see her she's in the room for about ten to 15 Min then hooks me up to an electrode machine and leaves.. is that normal?

I need to be taken out

Either on a date or by a sniper lol 🤷

If you can be invisible what is the first thing you will do?

What makes you smile?

Waking up my daughter every morning and giving her hugs and kisses. She is so kind and affectionate and all around adorable. Just thinking about my baby makes me smile 😁😍

Any one here have an internal monologue? I just recently learned that not everyone has it. I always thought everyone could somewhat hear themselves when they read a book, "talk to themselves", get a song stuck in your head, etc. I had no idea those who had an internal monologue were in the minority. I believe it was said in the 30% range population.

Hello Guys, I'm an Introvert and I'm not good at socializing, Can you give me some advices on how to socialize effectively?

Wisdom comes with age. And today, I’m another year wiser.

Blessed to see another year🎉 Happy Birthday Self!

Do you judge on looks?

I know physical attraction is important, but do you judge if you will talk to someone based on their vibe?

Wanna Live In A World Where

I cannot control what happens outside of me. I can control how I react to it. My biggest lesson of 2021 What's yours?

What is the biggest lesson you've learn in 2021?

Anyone just want to talk?

Sometimes we can get so lonely. You might even have friends that you can easily call up, but you dont want to bug them. Dm me, we can talk about anything.

What would you do?

If you have a friend, and you buy food. Your friend doesn't have enough money to buy food. What would you do?

People sure know how to make me feel alone.

It has been a DAY ... definitely the kind of night for curling up with a good stuffed animal and a familiar movie.

What do you do

What do you do when you want something to happen but there's nothing you can do about it?

Lol is it just me or is physical therapy staying to rely more on technology then actually dealing with another person? My physical therapist and I are scheduled to work together 3x a week and when I see her she's in the room for about ten to 15 Min then hooks me up to an electrode machine and...

I know people have gone through this... How do y'all cope with some of these? I know it can be really exhausting and even draining

Has anyone taken supplements for better brain function or to get rid of brain fog and it helped ?

It's 3:30 in the morning. I've been awake since 1. I super really regret forgetting to take my sleeping pills last night because the alarm is going off in 90 minutes. It's gonna be a freakin Day, y'all. 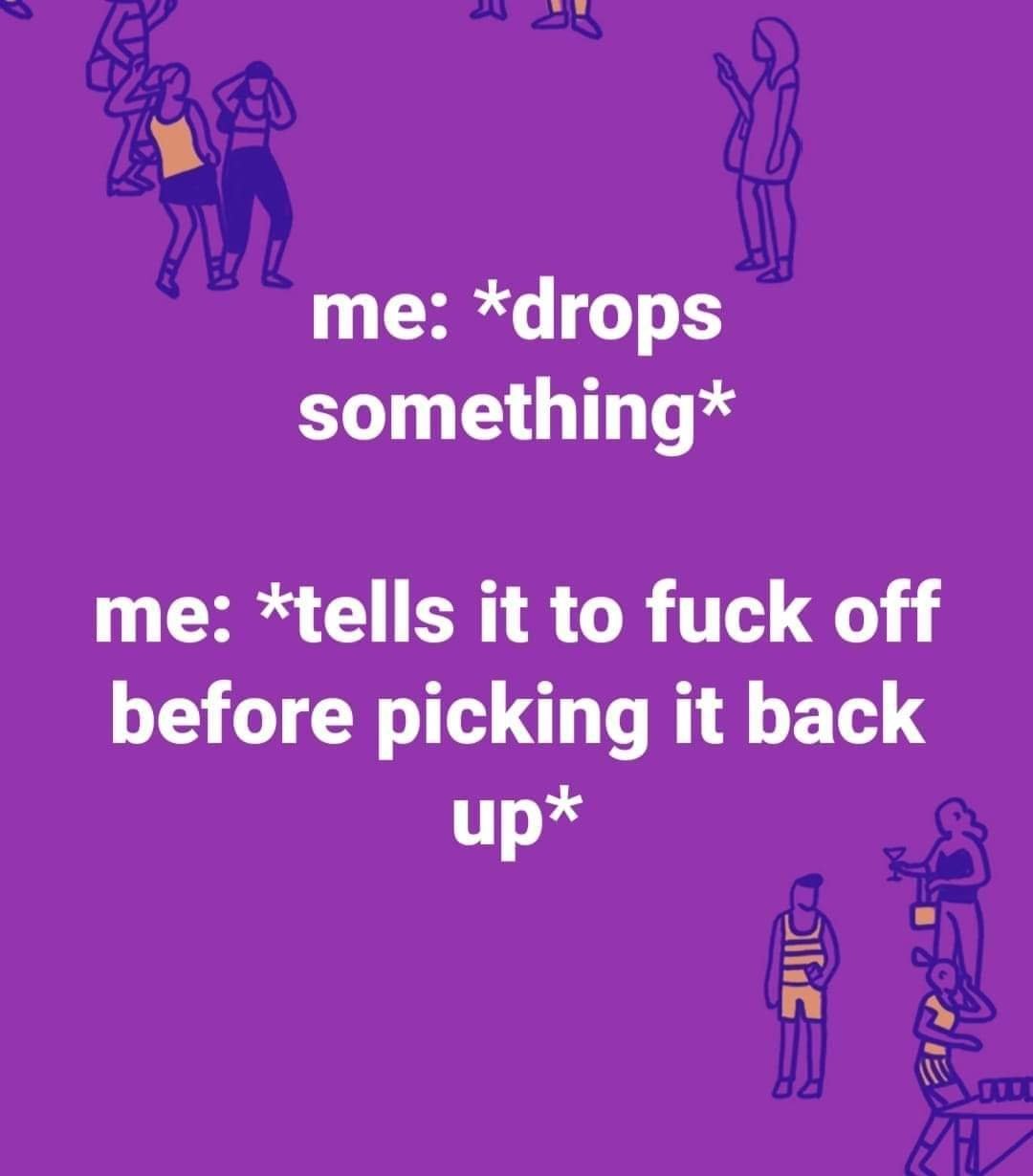 Just had a 37 minute full blown crisis when I pull up to my next building and realize I don't have my keys. My work keys. Which are attached to my car keys. Which I appeared to have lost and spent over half an hour looking for while freaking out because the previous hour had me running all over...

How your depression feels?

I suffer from anxiety and depression, the perfect combination 😓, It feels like depression is drowning me and anxiety is afraid of water. 😕

Fe just wants to socialize and bond with people. But Ni always has to first go through a detailed screening process for who Fe can socialize with. Most of the time, remaining with no one. And so Ni takes over and makes up abstract (fantasy) socialization for Fe !!!!